Tag Archives: YA novel: AND BY THE WAY 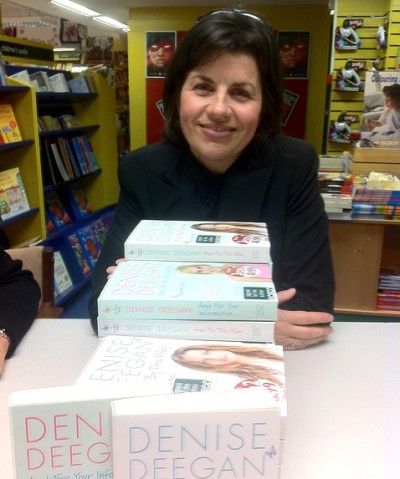 Today’s author interview is with Irish author Denise Deegan,  a the bestselling writer of seven contemporary novels, four for adults and three for young adults. She began her writing career with a book of non-fiction. Her books have been published in Ireland, the UK and Commonwealth, USA, Germany, Holland and Korea, for sample: “AND BY THE WAY” a story of a teenager who lost her mother and has no real connection to her rock star-father, became a bestselling Young Adult novel.

Denise, Is there a message in your book that you want your readers to grasp?
I like that people take different things from books. Many people have contacted me to say that Alex’s journey in And By The Way has helped them deal with loss.
.

What inspired you to start writing?
I was doing a Masters in Public Relations. While conducting the literature review, I realized that a book should have existed that didn’t. I wrote that book. It was a non-fiction book and was published. Then it was like being bitten by a bug. I had to write a novel. I had no peace until I gave up my business to do so.
.

How did you get the idea for the novel?
And By The Way is my fifth novel. While brainstorming with an artist friend for a picture book that we thought would be fun to work on together, we came up with the idea of a father who traveled abroad from work, coming home and telling his little girl about the country he’d been to. We both decided that, while educational, it was boring and politically correct.  My friend went to the Ladies.  While she was gone, a voice came into my head. It was a teenage girl who was giving her father a really hard time. Her voice was angry and sarcastic yet vulnerable. It completely gripped me. I grabbed a serviette and began to write.

I had just finished a two-book deal with Penguin. I was free to do whatever I liked. I decided to follow the voice and see where it lead. It emerged that the reason that Alex, the main character, was angry because her mother had died six months previously and her father had not been there for her. I realized later that the story had come from my subconscious. Triggered by the picture book idea, it was telling me that it’s not always good when a parent isn’t around.
.

Does your book have any underlying theme, message, or moral?
I do not like morals. But I think my writing is influenced – not deliberately – by my past. I was a nurse. One of the things I learned was to grab life while you have it. Though And By The Way deals with big issues, it is an optimistic book. Alex has to learn to trust that good things will happen again. She has to take a leap of faith.
.

Are your characters based on real people?
No, apart from Homer, the golden retriever who doesn’t retrieve. That is our dog.

.
Who is your favorite character and why?
I actually have three:

The Rock star – Alex calls her dad ‘The Rock star’ because he is not being a father to her. He means well but cannot handle loss. I like the idea that parents are supposed to know best but sometimes flounder themselves.
The Stylist – Marsha works for The Rockstar. She is adorably ditzy and optimistic. She drives Alex mad, until Alex realises that Marsha is optimistic despite tragedy.
Louis – ah, Louis, my all-time fave. I am a sucker for the bad-boy with a heart.
. 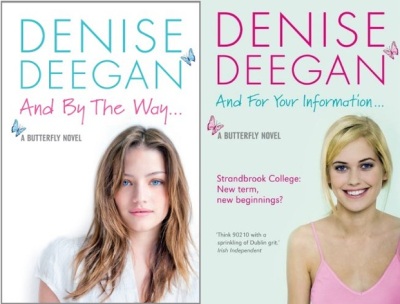 Two of Denise Deegan’s YA novels

Give us an excerpted quote from your favorite review of this book:
‘It was such a powerful, emotional, beautiful book, one I loved to pieces and gobbled up as fast as I possibly could. I just can’t wait to read more by Denise Deegan – it was just so freaking amazing!’
Book Addicted Girl
.

If Oprah invited you onto her show to talk about your book, what would the theme of the show be?
Recovering from loss.
.

.
Thinking way back to the beginning, what’s the most important thing you have learned as a writer from then to now?

.
Considering a book from the first word you write to the moment you see it on a bookstore shelf, what’s your favorite part of the process? What’s your least favorite?

Favorite: when the characters take over and write the story. For example, the character, Louis, was not meant to have a big part but he muscled his way in. I love when this happens.

Least favourite: depends on the book. It can be very difficult, for example, when you know that something is not working and you are so close to the book that you can’t see the solution. A good editor is invaluable at times like this. I have been very lucky with The Butterfly Novels. I have an amazing editor.

.
What scene or bit of dialogue in the book are you most proud of, and why?
There is a sailing scene at the beginning of the book that I love where Alex is trying so hard to hate a guy she fancies. I like all the scenes with Louis (of course). I am particularly fond of the scenes between Alex and her dad when he realizes his mistakes and tries to make things right.
.

What genre have you not yet written but really want to try?
I am writing historical fiction for the first time and loving it.

.
If your book would be made into a movie, who should play the main character?
Saoirse Ronan, but perhaps that it too obvious a choice. I’d like some casting agent to surprise me.

.
How did you get published? Please share your personal journey.
Firstly, I gave up working. The book was what I most wanted to do and always ended up as the last thing I got to. I became a very angry person. Giving up a business to write a novel was a huge (and some would say mad) step. From the beginning, I treated my writing as a career. I really focused on the book.

When I did that, it became clear that the book I was writing was nothing special. So I stopped writing it. Then came an idea that had not been written before and that is what I wrote.

I did my homework. Sent off the three chapters etc. I expected rejection so went ahead and started writing a second novel for two reasons. One, so the rejection wouldn’t stop me. Two, so that publishers/agents would see that I had more than one book in me.

An agent came back to me and gave me tips on editing – without commitment. I still cannot believe how naive I was back then. I had not edited the book at all. When I started the process, I really got into it. I put the other book on hold and spent six weeks making the first into a much better book. I sent the revised chapters back to three people who had been encouraging in their rejections. They all wanted the book.
.

What do you find is the best part of being an author?
Hearing back from readers who loved the books, who were encouraged by them, changed by them, helped by them or felt newly equipped to help others. It is very special when people thank me for writing a book.

.
What is ONE thing that you have done that brought you more readers?
Visited schools and gave readings, perhaps?
.

What’s one thing that your readers would be surprised to know about you?
What, perhaps, they don’t realize is the extent to which I appreciate them and like to hear from them.

.
Where can people learn more about your writing?

AND BY THE WAY
amazon.com/dp/B009SMWI6K

AND BY THE WAY

Denise Deegan, famous for her Butterfly Novel series has been a nurse, a china restorer, a pharmaceutical sales rep, a public relations consultant, an entrepreneur and a college lecturer. Her short story, Checkout Girl, was inspired by her days carrying out the toughest of all these positions. Denise lives in Dublin with her husband, two teenage kids and their dog, Homer. She can be found at Facebook and Twitter: @denisedeegan

Perfect Gift for Young Adults: “And By The Way”

Alex is caught between honoring her mother’s memory and needing desperately to move on. She’s so afraid to move forward. If she let’s herself be happy, she’s afraid the world will rip that happiness away from her again.

“Six months ago, I lost my mum to cancer and my dad, ‘The Rockstar’, to work.  Now, I don’t do close. That way I won’t get hurt.  My friend Rachel won’t let give up on me. And that’s a problem. So is David McFadden, a guy in my class who says he wants to help. Six months ago, he could have, but didn’t.  Now, it’s too late. The last person I’m going to listen to is David McFadden.  When he calls me Ice Queen, I’ll show him just how right he is.”

The PERFECT Christmas gift for teens: “And By The Way” – in America only 99 cents till Christmas

More from reviews:
‘This is a gem of a book; intriguing, deep and thoughtful. Alex is a feisty heroine, and her voice rings strong and true. It’s fun entering the world of the privileged teen, with their credit cards, fake tans and less-affluent friends. Teenagers – and adults – will adore this book. It kept me up half the night.’ Irish Examiner.
‘An engaging and emotional read that leaves you wanting more – bring on the second installment.’ RTE Guide.
‘It was such a powerful, emotional, beautiful book, one I loved to pieces and gobbled up as fast as I possibly could.  I just can’t wait to read more by Deegan – it was just so freaking amazing!’ The Book Addicted Girl, blog.
‘We can’t explain our fascination with the spawn of the rich and famous but it won’t go away. AND BY THE WAY… is our latest addiction and it’s the first title in the new BUTTERFLY NOVELS series….super compelling.’
Kiss Magazine.
‘AND BY THE WAY… is a journey through grief, love and self-discovery. It’ll break your heart and make you laugh – both at the same time. And by the way…you’re going to love it.’ Dubray Books, Staff Recommended Reads.
‘I absolutely loved it. I was so engrossed in it that my family started pulling it out of my hands.’ Author Keris Stainton.
‘This is an absolute gem of a series.’

.
Denise Deegan is the bestselling author of seven contemporary novels, four for adults and three for young adults.  Her first butterfly novel, And By The Way, was published as an e-book in the USA just a couple of weeks ago.

She began her writing career with a book of non-fiction. Her books have been published in Ireland, the UK and Commonwealth, Germany, Holland and Korea. She has been a nurse, a china restorer, a pharmaceutical sales rep, a public relations consultant, an entrepreneur and a college lecturer. Her short story, Checkout Girl, was inspired by her days carrying out the toughest of all these positions. Denise lives in Dublin with her husband, two teenage kids and their dog, Homer.